On DVD: The Best of Dr. Katz, Professional Therapist

Do you feel that you could use some therapy? Dr. Katz is there for you. Paramount Home Video recently released The Best of Dr. Katz, Professional Therapist on DVD.

Dr. Katz, Professional Therapist was the creation of comedian Jonathan Katz, who also provided the voice of Dr. Katz. The animated show aired on Comedy Central from 1995-1999.

The collection is a sampling of what is considered the best episodes all neatly gathered for your viewing pleasure.

The show has Dr. Katz providing guidance, advice and therapy to a variety of comedians. Man familiar voices make appearances within the episodes including Dave Chappelle, Sarah Silverman and Denis Leary. These animated therapy “sessions” are largely adlibbed and it seems all involved are having a good time with the bit.

Also in the office is Katz’s secretary Laura (Laura Silverman) who seems like she mostly doesn’t give a damn about Katz or his crazy patients. Dr. Katz’s son Ben (H. Jon Benjamin) has a lazy streak a mile wide and needs some of his Dad’s help seemingly.

Some of the highlights include Patton Oswalt trying to get the Dr. to pretend to be a supervillian that he must overcome and Margaret Cho doing her side splitting imitation of her mother seeking Dr. Katz’s help in understanding the gay lifestyle. Dave Chappelle needs help understanding superheroes and Denis Leary has some vicious anger issues. The adlibing isn’t a huge stretch as most of the issues these comedians face seem to be based on their popular comedy bits. So here they just simply expand upon what they’ve been doing on stage all along except that they have to censor it a bit. Since all of these comedians are hilarious and so are their bits, the show has a lot of laughs to offer.

The only problem is that the episodes are a bit repetitive. This group doesn’t show anything in the way of evolution or growth. In other words, over extended viewing the gimmick could wear thin.

And, just in case you don’t remember, Dr. Katz is presented in “squigglevision” which is a shaky type of animation. It doesn’t bother me but I have heard it is bothersome to some, so it is a word of warning.

All things considered, The Best of Dr. Katz, Professional Therapist is a nice trip down late 90’s lane. There are some funny moments that make up for the bits that fall a bit flat.

This is presented in the original full frame aspect ratio. I did not notice any grain or artifacts. The squiggly way the animation is done might get on your nerves a bit, but this is a serviceable transfer, nothing to go berserk over.

This is presented in Dolby Digital 2.0. Dialogue is clear throughout. This isn’t the disc you would pull out to put your home theater sound system through its paces, but fine for the program presented.

The Best of Dr. Katz, Professional Therapist is presented in standard amaray case.

There isn’t much in the way of bonus material here. There are 4 “Dr. Katz Remembers” episodes that focus on the relationship between Dr. Katz, his son Ben and his assistant Laura. 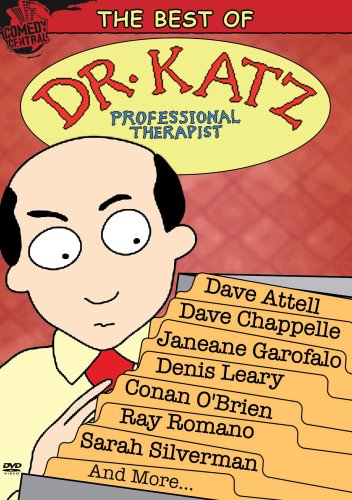