Well this is it. The movie fans have been waiting decades for. They were both in Godfather II but they never appeared together on screen. They were both in Heat but only shared a couple of short scenes. Now we finally get to see the great Pacino and De Niro together for most of a movie in all of their glory.

After the testosterone drenched credits finish rolling by a low quality close up of Turk, Robert De Niro fills the screen. He is confessing to fourteen vigilante murders. When did this all begin? Turk asks, well about four years ago. As he starts to explain the scene cuts to the events of four years ago when Turk and Rooster, Al Pacino, investigate the death of a child. The child’s killer ends up getting off but Turk has had enough. With Rooster’s fore knowledge he plants evidence that ends up putting the child’s killer in jail, just for a crime he didn’t actually commit. From here we move on the the events of the last several weeks. The vigilante killings have started to pick up. Despite the killer leaving little poems at the crime scenes nobody really seems to get all that interested until the count gets up to ten.

Rooster and Turk as senior detectives are working the case along with two other cops Perez and Riley, Leguizamo and Wahlberg who happened to be investigating one of the vigilante’s victims before the crimes got linked together. Also helping out with the investigation is another forensic detective, Corelli is played by the beautiful Carla Gugino. As the scumbag victims continue to pile up the detectives, with the exception of Turk, begin to suspect a cop is the vigilante. Actually as the evidence keeps coming in it all seems to point to Turk. As you can imagine this tends to cause a bit of conflict between the detectives.

The way the movie starts is bold. I was expecting a whodunnit but instead it appears that the movie is going to focus on the how instead of the who. Maybe if I had just accepted that the movie may have been more enjoyable but it just seemed too obvious, I kept trying to think of ways the killer could be somebody other than Turk. It’s a fine line with movies of this nature. It’s like one of those watches with the skeleton face that lets you see the works. That’s great if the watch works are aesthetically pleasing, but it’s just an ugly gimmick if they’re not no matter how efficient. That’s the plot. The escapement is a little complicated and while it all works for the most part it ‘s not the most pleasing thing to look at. Sometimes it’s better to just hide the works. Some of the plot elements don’t make a lot of sense even after multiple viewings and numerous not so obvious flashbacks make it hard to establish what is happening. There is a lot of misdirection trying to make the plot seem cleverer than it actually is.

While the plot is a little disappointing that’s not the main attraction here anyway. What makes this movie is Pacino and De Niro. While neither of them is at their best in the movie even coasting these giants are a lot of fun to watch. They have a great chemistry together, it’s natural to buy them as long time partners. While they are hamming it up and chewing the scenery a good bit there are a couple of scenes of subtlety. The big surprise to me was how good everyone else looked compared to them. Instead of overshadowing the rest of the cast the rest of the cast simply raised their game.

The video is presented in wide screen. As you would expect in a transfer from a contemporary movie there are no print defects noticeable. I never noticed any compression artifacts either. I looks great, noirish even, nearly all the scenes are full of interesting shadows that are well defined and rich. The color saturation moves from warm to cold depending on the needs of the scenes but the colors is always good.

The audio is presented in Dobly 5.1 Surround Sound with English and Spanish subtitles. The mix is great. There are several scenes where a character’s recorded dialog may intersect with the same character’s on screen dialog, but even under those circumstances it is still easy to figure out what’s what. The foley and score never step all over the dialog and I never noticed any sort of compression artifacts or distortion.

The DVD comes in a standard Amaray case with a matching cardboard slipcase. The artwork features a very unflattering black and white photo of De Niro and Pacino as Turk and Rooster. The backside presents the cast against the New York skyline. The artwork is striking and appropriate, even if Pacino’s scowl is a little bit overkill. There is a making of featurette and another one about when cops go bad. They are both worth taking a look at. There is also a commentary with the director John Avnet.

If it was anybody but Pacino and De Niro in it this would be an easy movie to skip, but there presence makes it a must have. Even with it’s flaws, who knows if we will ever see them together like this again. 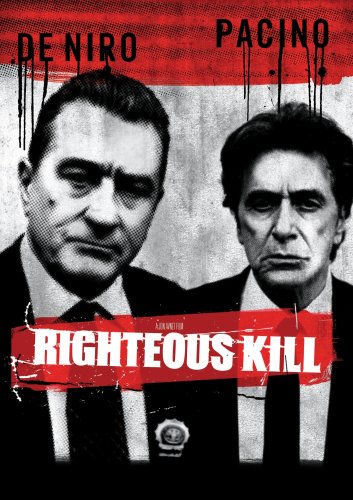