On DVD: The Secret Life of the American Teenager: Season One

The Secret Life of the American Teenager is the most recent television show created by Brenda Hampton, who also created Blossom, 7th Heaven and Fat Actress. It is up to you if the previous sentence is a recommendation or a word of warning. Walt Disney Home Video recently released Season One on DVD and I gave it a whirl.

The show concerns the daily life of Amy (Shailene Woodley), not your typical everyday “band nerd”, whatever that means. She is dealing with a lot more than just who is “first chair” in her section or what to do after the football game on Friday. She has a boyfriend named Ben (Ken Baumann), the prototype for the “nice guy” and is this boyfriend that has Amy in a surprising situation: she is pregnant after what could be the quickest “encounter” ever on record. How is she going to keep this secret under wraps?

She has some friends and of course, they fit into the different “types” found at your everyday high school. Grace (Megan Park) and Jack (Greg Finley), a cheerleader and jock combo that are trying hard to maintain abstinence. Ricky (Daren Kagasoff) and Adrian (Francia Raisa), are the promiscuous duo of the school.

And, while I am on the subject of John Schneider, in this show, he plays a gynecologist. For some reason, seeing Bo Duke (Dukes of Hazzard) as an O.B/GYN is disturbing and Schneider plays the part so frivolously and with sickly “wink and a smile” it truly as if Bo decided not to run the roads of Hazzard County anymore with his brother and decided to make money looking at the nether regions of women folk.

Anyway, maybe it is just me that finds it a bit creepy. I digress. Anyway, the show plays out just as you expect it too and feels a lot like Hampton’s other show, 7th Heaven, which honestly, I wasn’t a fan of.

This show is filled with melodrama and false sentiments and clichéd stereotypes and situations. Juno, this show is most definitely not. Not that the participants don’t give it their all it just gets buried in falseness and leaves you with a sickly saccharine aftertaste.

The episodes included in this release are Falling in Love, You Are My Everything, I Feel Sick, Caught, What have you done to me?, Love for Sale, Absent, Your Cheatin’ Heart, Slice of Life, Back to School Special, and Just Say No.

So, I guess you can tell this show isn’t my cup of tea. Perhaps it is yours. If you like your teenage pregnancy shows filled with melodrama, cliché’s and with such a feather light sentiment that you feel like they could blow out of your DVD player like a leaf on the wind, this show is for you. You know who you are.

The show is presented in widescreen. The colors are vibrant and the detail level is respectable. It isn’t mind-blowing, but looks fine for the material presented.

Presented in Dolby Digital 5.1, the dialogue is clear and mixed well. It isn’t the most dynamic presentation of a show, but this show doesn’t require it. It isn’t going to give the audio system a workout, but is acceptable.

The 3 disc release is presented in a “overlapping” disc case with understated artwork.

The only bonus features offered are your typical making of featurette entitled On the Set with the Cast and a song by Jesse McCartney to download. 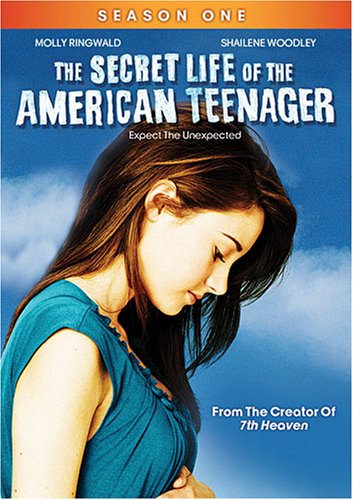