On DVD: Father of the Kamikaze

Before I chucked this disk in the player I wondered if this is a biopic of a monster or a hero, now that I’ve watched it twice I’m still not sure.

The movie centers on the war career of Onishi Takijiro, played by Koji Tsuruta. It picks up just as the Allies are invading the Philippines. The Japanese top brass know that they can not defeat the industrial might of the Allies by waging conventional warfare. They are in need of some weapon or tactic that will act as a force multiplier. While Onishi is not the first to consider suicide bombing, he becomes it’s champion, advocating it’s use to the higher command. Eventually he is put in charge of implementing these controversial tactics and he and his subordinates assemble the young pilots and ultimately send them off to their deaths. Onishi eventually sends twenty six hundred pilots on suicide missions. As the weight of this responsibility builds he becomes obsessed with making sure that the deaths of these young men are not in vain which becomes difficult as Japan’s war fortunes continually depreciate.

The story moves in roughly chronological order with an occasional flash forward or flash back. These are sometimes effective and sometimes not. The story branches out in several places which lengthens and weakens it. The characters that get followed in the side stories are interesting enough but the branches don’t get the attention that the need to really add something to the story and just make it more difficult to follow the main story line. While the script may be a little loose the acting and the cinematography are top notch. Like I said the acting is uniformly excellent, if a little over the top now and then. Koji Tsuruta as Onishi is particularly magnificent. The film is shot beautifully with interesting scene compositions. While a lot of the combat scenes use stock footage there is also some excellent model work and admittedly a bit of cheesy model work but not much. There are several composite scenes mix new and stock footage with the models quite effectively. It’s a nice reminder of what can be accomplished without CG.

Of course the heart of the movie is about the morality of the Kamikaze tactics and how their use affects not only the pilots, obviously, but the men who send them to their deaths and the culture that produces such a solution. While Onishi has several monologues justifying the suicide tactics I could never really wrap my head around them. Which is fine he’s a complicated character so I’m not surprised to find some of his justifications to be sophisticated as well. When the movie falters is when it gets away from this theme. I think even in 1974 is could be taken as a given that war is hell. You don’t have to spend screen time explaining that to me. At one minute short of two hundred these little side roads could have afforded to be trimmed. Still it’s definitely thought provoking. I’m still not sure if that’s because this is supposed to be a movie that makes you ponder or if it’s just bad storytelling but I’m willing to give Yamashita the benefit of the doubt.

The video is presented in wide screen format. It looks good but it looks like a movie filmed in the seventies which is only appropriate as it was released in 1974. Besides the stock footage there is very little dirt or print damage. There is a fair bit of model work and it is often massaged to blend in with stock footage or some bits of green screen work and while this is usually quite effective there are a couple of short scenes where it just doesn’t blend. The color is good and while the focus isn’t really all that sharp it’s consistent and never gets sloppy. Its just a bit on the soft side to match the tone of the film. If I look for it I can notice a bit of aliasing on sharp lines every now and then but I never noticed any other artifacts. All in all it’s a great presentation of a thirty five year old movie.

The audio is presented in the original mono. The only language is Japanese and the only subtitles are in English. The subtitles are great though. Across the top appear little technical, cultural or historical snippets to explain the more obscure tidbits that come up now and then. This leaves the bottom for the dialog subtitles. Through the menu you can select either white subtitles or yellow. Alternate color subtitles are used to separate dialog if one actors lines are stepping on another’s. A simple thing that really makes it easier to keep track of what is going on. The audio itself is fine with a good mix. I never noticed any distortion or other defects. The score is enjoyable but as melodramatic as the movie.

The DVD comes in a standard Amaray case. The artwork is striking and clean with appropriate copy. The DVD menus are attractive and simple. There is only a sprinkling of extras, but they are definitely worth taking a look at. There is an image gallery and some trailers of similar movies from AnimEigo. There are no commentaries but there are production notes which expand on the little tidbits shown in the top of the screen during the movie. There are also two interactive maps that explain some of the geography of the war in the Pacific.

While it’s long, a little overly melodramatic, and thematically confusing, well it was for me at least, it’s still an decent movie, but there are two items that to me make it really interesting. Reason One; It’s engaging watching a Japanese movie about WWII, I have seen tons of movies from the Allies point of view but this is the first that I have seen from the point of view of a former Axis member. Reason Two: This film was made roughly thirty years after the events in the movie. The movie is now roughly thirty five years old. WWII was more recent to the people making this movie than this movie is to us now. 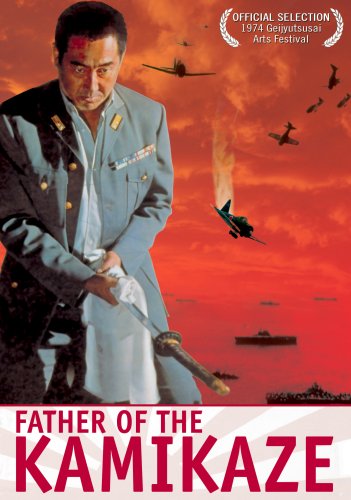 The Packaging and Bonus Features 6/10