Did you ever see a film that you wanted to be great but it just wasn’t? Traitor is a very slick film with a fantastic actor in the lead role but it’s just missing that special something that would make it a great film.

Don Cheadle plays a devout Muslim working in Yemen selling weapons and his own bomb making skills to the highest bidder. He appears to be a villain, and no doubt he’s doing villainous things, but he’s troubled by what he does. It appears that his troubled past effects his actions and he carries guilt over what he does. This type of personality is required for Cheadle who otherwise would just be unacceptable as a villain.

He meets up with a group of terrorists while in prison that are planning a major attack on the United States and agrees to work with them on the plot. The film becomes a mystery thriller as it follows Cheadle through the adventure and forces the viewer to figure out who Cheadle is and what his true motivations are. Guy Pierce plays an FBI agent hot on Cheadle’s trail determined to stop him at any cost.

The film is slick and it features some moments of solid drama and suspense but unfortunately overall the film is predictable and it relies too heavily on long overused thriller clichés. Everything in this film has been done before and done better. Cheadle is excellent in the film but no one else is. The terrorists are underdeveloped and are caricatures and stereotypes and even Pierce who is usually good has nothing to do here to make his character unique.

Nachmanoff has a great eye for action but he really needed a fluffer of sorts to come in and perform additional script work to make the characters in Traitor more unique and interesting. The big twist in this film is not only predictable but it stands heavily in the shadow of another film that did it better: The Departed. Traitor isn’t a horrible film. In fact it’s definitely worth a rent for the fan of thrillers with a story. It’s just disappointing to see that the film could have been so much more.

This 1080p presentation is one of the best that Anchor Bay has released. Colors in this film are anything but natural with overblown whites and sharp shadows but it’s all done purposefully as a stylistic choice. Textures are highly detailed, black levels are super dark, and considering the color shifting skin tones look fantastic. The only issues are with a few really dark scenes where detail level drops a bit and there are some bits of digital noise here and there too. Overall the presentation is really good and a huge step up from the standard def DVD.

The TrueHD 5.1 presentation is quite energetic with great use of surrounds and even a bit of sub woofer action. Score, sound effects, and dialogue are mixed clean with no issues of other audio covering dialogue. Action scenes bring the rear speakers to life with plenty of bullets whizzing and car crashes and explosions. There are a few times when the audio doesn’t feel properly placed within the sound stage though. For example a particular sound should be blaring from the rear speakers based on the visual cue but it dominates the fronts instead. With that said overall this is one of the better audio presentations from Anchor Bay.

The bonus features here are the same as the ones on the standard def release but at least they’re in HD here.

Writer/Director Jeffrey Nachmanoff and producer/actor Don Cheadle deliver a fairly monotone but informative audio commentary to start things off. The commentary covers the script, casting, and production in a very laid back way. Cheadle seems like a relaxed sort of guy and it comes through in this commentary.

There are a couple of extremely short featurettes; one covering the stunts of the film and another covering the locations. Both featurettes are interesting but way too short. There’s no standard making of featurette and no features that seem to go into any depth about the film.

The second disc features a digital copy of the film.

This film deserves more documentary coverage than it gets here but at least there’s a commentary.

Traitor is definitely worth a rent and for hardcore fans of the genre it’s still probably worth a pu4chase. Don Cheadle is great here and the production is extremely slick making for an entertaining diversion. 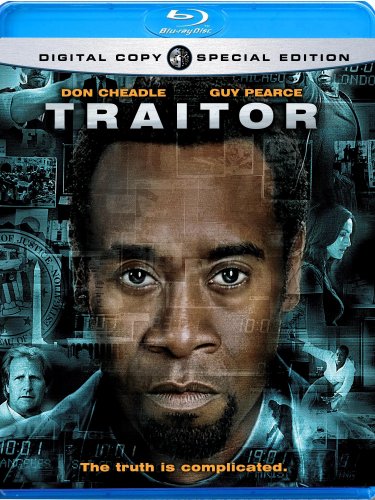