Asian inspired horror is still a huge draw for many genre fans and even casual movie goers. However, the source is always the best place to go for these films since Hollywood notoriously messes with the original vision of the director. With Japan dominating the Asian horror market, China and other countries are getting in on the action. In the Asian horror vein, we get the Malaysian horror anthology Visits: Hungry Ghost Anthology.

Visits: Hungry Ghost Anthology is series of four related films set against the urban setting of Kuala Lumpur. The events are supposed to be taking place during the Chinese Hungry Ghost Festival. This festival is said to be the time that ghosts are allowed to roam amongst the living. The way I understand this concept it is like Halloween, but again more Eastern. An interesting take on this idea is that the films are in a modern setting complete with electronics and automobiles. This actually works for a spin of old world ghost story and modern scares.

There are some people who really hate Asian horror. However, I do like the genre and have seen many films that work well. Sadly, this film needs a bit more work before it will be mentioned with Ringu and Ju-On. The main problem with this film is that each story seems unfinished in some way. Its as if we were being told a really funny joke, but denied the punch line. I really hate this fact because Visits has some great things going for it.

For example, each director understands cinematography quite well. In fact, I will use this film to explain angle, color, and tone in my cinema course. The scenes are that good. All of the scares work really well and come at the best possible time. We are actually scared at places where we should be and not from gore, but from suspense and pacing. I love the angle work on this film as well. The best being “Anybody Home” where we are treated to the lives of various people through the lens of security cameras.

In addition, the ghosts themselves are creepy. I love how they jump out or rather not jump out at the right time. My favorite entry “Nodding Soup” gives just enough glimpses of the ghost in the corner of your eye or through a camera. This is the sort of scare I love from Asian cinema. There is very little blood, but lots of horror, something Hollywood should try for more and more. I get a Rosemary’s Baby vibe from the ghosts, just glimpses.

For the negative, each story needs more explanation. Sadly, I’m not familiar with the customs of Chinese Hungry Ghost Festival. My ignorance, however, shouldn’t make this movie inaccessible. In fact, the job of the movie maker is to give me enough information to enjoy their film. This may be from the fact that Western audiences and Eastern audiences are a bit different. I’m totally fine with this, but an insert would help to explain concepts.

As far as movie making, the anthology stories have odd endings. I expect to have a bit of a definite ending, but some of the stories just stop and make way for another entry. This is taxing when you are trying to make out the overall plot. Again, I do not think this is sloppy, just a poor decision on the directors.

All in all, this is an average film that could be much better with the use of an editor. I loved the scares, but found myself confused way too many times. Who knows, with more research into Malaysian and Chinese customs, this movie might have a higher rating.

The visuals are presented in widescreen. The colors are muted and gray, but work so well with this release. It looks more realistic without being shiny and glossy. A movie like this needs to have a bit of grain to it to be believable and real. I enjoyed the use of subtitles and they show up rather well against the background. On the aspect ratio front, I couldn’t find any information about the widescreen aspect, but the presentation shows up full screen on my HDTV. This may be a setting issue and not a disc problem though.

The audio is Cantonese and Mandarin and is rather nice for the ambiance of the film. The only negative comes from the fact that the disc is not mastered in Dolby Digital 5.1. I would have liked to hear the noises of the ghosts from other angles. Overall, the audio is passable, but not spectacular either.

The packaging is the average amaray case with rather striking artwork. The font used for the cover reminds me of 1930s horror films, which I enjoy very much. One of my main hang ups with the movie is slightly remedied with the Making Of feature. This feature explains some of the artistic decisions of the director. I loved how the Nodding Scoop game is explained. I found that to be the most interesting and wanted to know more about it.

As far as other special features, this disc is really lacking. There is a nice trailer gallery, but could be better with more horror genre films. The Making of feature does give the bonus features some much needed kick. 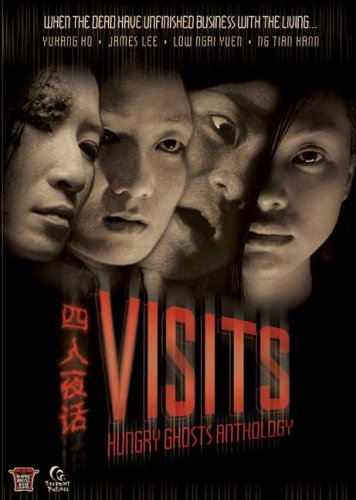