On Blu-Ray: The Duchess

I enjoy “costume” or period dramas. Okay, that is not easy to say among my film fanatic friends as they give me a hard time for liking Dangerous Liaisons, The Age of Innocence, Howard’s End and many more. So, The Duchess looks like it has some beautiful period costumes and people that are miserable in their romantic lives, so will I like it? Paramount Home Video recently released The Duchess.

Georgiana Spencer (Keira Knightly) is a young sixteen year old girl as the 18th century story begins. She is finding out that she is to marry William Cavendish (Ralph Fiennes) who just so happens to be the 5th Duke of Devonshire. His blood runneth blue, indeed!

While she is young, she is strong willed and confident and easily adapts to the life of privilege and social obligations. She talks with conviction about politics and freedom over dinners. She also establishes herself as quite the fashion icon, always wearing the newest and most daring hair, clothing and accessories.

While all of this is exciting, life with William is anything but delightful. He seems to care less about his young wife and doesn’t pay her any mind at all. Their intimate life is forced with William’s only intention to get her pregnant with his heir, not to have romance or passion in their lives.

Georgiana has developed a close friendship with Elizabeth Foster (Hayley Atwell), a free spirited woman who tells Georgiana passionate tales with her different lovers. Georgiana realizes her life is completely without passion. That is until Charles Gray (Dominic Cooper) enters her life. The future Prime Minister brings excitement into dull gray life and she enjoys their flirtations.

William soon finds out about all of this and while he regularly is unfaithful, he doesn’t like the life and friends Georgiana has developed and the power and emotional battle between the two begins. How will Georgiana story end?

If you do some research on the real Georgiana Cavendish, you find she was a spicy lady herself. Fashionable, headstrong with a desire for alcohol and men to boot, she wasn’t like the other ladies in the social circle.

Kiera Knightly is proving herself as a reliable actor in these types of films. Ralph Fiennes also turns in a strong performance. Charlotte Rampling, as Georgiana’s mother makes a strong impression her few moments on screen. She does a lot with a small part.

Now, lets talk about the costumes. Let’s just say that if you are into that sort of thing, the costumes and art direction is absolutely sumptuous in this film.

So, all things considered, The Duchess delivers what the typical costume drama has to offer. It may not be one of the greatest of all times, but it makes for a nice night of viewing.

This is presented in Anamorphic Widescreen. The blue transfer is first rate and the colors are vibrant. I do wish the black levels were more dense. The image could almost be described as silken

The audio is presented in Dolby True HD 5.1. The audio mix is wonderful with dialogue crystal clear and vibrantly mixed with ambient sounds.

Presented in a standard Blu-ray amaray case, the artwork is tastefully understated.

There are some nice bonus features to explore on this release. However, not all of them are in High Def, so do not be misled.

How Far She Went: The Making of the Duchess is offered. While a standard making of featurette, it is enjoyable to watch.

Georgiana in her Own Words finds Biographer Amanda Foreman discussing Georgiana original letters and her impression of the woman.

Costume Diary is about exactly what the title implies and there is also a collection of trailers. 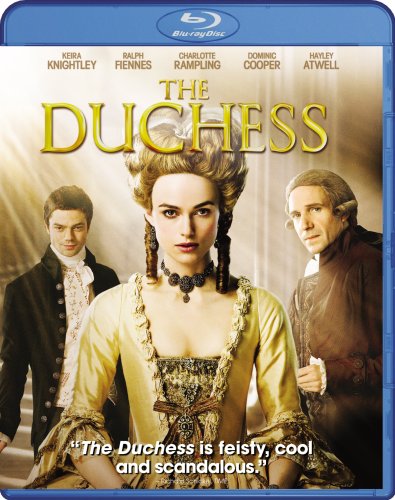