Event Horizon did one thing right away when I dropped the blu-ray into my Playstation 3; it made me wonder what happened to the epic space movie. It seems that the only space movies being made these days are those attached to a franchise such as Star Trek and Star Wars. It’s been way too long since a movie like Alien hit the big screen. Once upon a time Star Wars was just a movie, not part of a franchise. Projects are supposedly in the works, but they’ve been in the works for a very long time with no results. Supposedly, Orson Scott Cards modern classic Ender’s Game is coming, as is Isaac Asimov’s epic book series The Foundation Trilogy but there’s been no news on those projects in a really long time.

Watching Event Horizon made me yearn for a new space movie, not just a science fiction movie, a space movie. I remembered really hating Event Horizon back when I saw it in the theater in 1997 but it seems that I’ve grown soft or even possibly desperate because the movie didn’t seem as bad this time around. The flaws in the film are still there to annoy, but there’s some things to appreciate too. The biggest flaw in the film is its utter lack of originality. Event Horizon owes it existence to the original Alien, the greatest of horror/sci-fi crossovers. The other big problem with the film is that it introduces some interesting concepts and thematic elements but never truly delves into them. An idea gets introduced and then it’s gone in order to make way for some special effects shot,

The thing to appreciate the most about the film is just how strongly it sticks to its mood and atmosphere. This is a bleak horror film set in space and it never deviates from that path. There’s no comic relief or romance of any other distractions to pull us out of the desperate situation the crew of the Lewis and Clark have found themselves in when they attempt to recover the long missing ship appropriately named Event Horizon. The horror in this film includes some pretty nasty gore too. Director Paul W.S. Anderson has an eye for the gore and the set pieces that build fear and tension work better here than in any film he’s done since this one. The special effects hold up pretty well considering the age of the film and the fact that it was obviously a B grade production. The cast is led by two solid actors in Sam Neil and Laurence Fishburne. Both actors work with the little exposition they’ve been given to create unique characters within this universe, if you will.

The basic spoiler free plot synopsis is that a ship, the Event Horizon, with a special engine, has been lost for seven years and the Lewis and Clark, a ship with a search and rescue crew, has been dispatched to investigate the ship. A scientist (Neil) is along for the investigation because he was the inventor of the Horizon’s engine. It seems that the engine can open black holes in space allowing it to instantaneously travel virtually anywhere. The crew discovers that the engine can not only travel across great distances but it can also travel across dimensions and even travel to Hell, and well, back. What it has brought back with it killed the ships original crew and is now ravaging the crew of the Lewis and Clark.

The technical specs are all spot on here which is commonplace from Paramount. The film is presented in full 1080p resolution in 2:35:1 widescreen and the audio comes in Dolby TruHD 5.1. Image quality is fantastic with solid blacks, good contrast, and minimal grain. I say minimal grain because it is present but never excessive. There’s also some instances of banding but it only happens a few times and isn’t too annoying. The image is in fact so good that it makes a few scenes of lackluster effects stand out more than they previously did on standard def DVD. For a lower budgeted science fiction film, Event Horizon looks great on blu-ray.

The film features some immersion with sounds popping from the entire soundstage. The only problem is that it’s not consistent. Your subwoofer will pump throughout the film but your surround speakers will only get used occasionally. Dialogue, score, and sound effects are mixed clean for the most part with only a few instances of the dialogue coming through a bit soft, There are some instances where you’ll ride the volume on your receiver because certain scenes are just too loud in comparison to the rest of the film. During high action this audio presentation shines, but it doesn’t provide the level of subtle ambient sound effects during quieter moments that really create an immersive experience. Audio is also available in standard Dolby Digital 5.1 French and Spanish.

The single disc blu-ray packaging is uninspired featuring the dreaded floating heads for artwork. The release doesn’t even rate a slipcover.

The bonus features from the two disc edition have all been ported to this blu-ray disc. The biggest bonus feature here is a feature length audio commentary with director Paul W.S. Anderson and producer Jeremy Bolt. The commentary offers up some great information including a discussion of everything from the influences of other films to the special effects, thematic elements, and the cast. Like the audio presentation, this commentary is inconsistent. Things start getting interesting and there’ll be dead space where the two seem to be just watching the film.

The Making of documentary is actually longer than the film itself! If you’re a fan of this film, then the level of making of coverage here will make you giddy. The documentary is broken into five featurettes that focus on everything from the inception of the film, the casting, the special effects, and even all of the changes made to the film before it was finally released to theaters. Anderson’s discussion of those changes really got me interested in seeing a director’s cut of the film. Maybe that’ll happen one of these days. The featurettes are stiffly cut together without much flow but the information they share deepens the experience of viewing the film so they get the job done.

The Point of No Return: The Filming of Event Horizon is a brief four part featurette with Anderson discussing the filming of some specific scenes. There are also some deleted and extended scenes and even some storyboard collections that represent scenes that never got filmed, all with director’s commentary. Finally, there’s one theatrical trailer.

The selection of bonus features here is impressive and after watching them you may find your self more willing to appreciate the film than ever before. There was a lot of passion for this project from its creators and it’s apparent in this supplemental material. All of the supplements are in standard definition video. Also, where’s the new blu-ray exclusive stuff?

Event Horizon is derivative, and the special effects look more dated than before due to the clarity of the blu-ray, but this film does have more entertainment to offer than you might expect. Some of the effects, even with the added fidelity of the hi def format, still look great, the set pieces are interesting and they do a great job of making the Event Horizon feel like more than just a ship, the acting is solid even with some clunker dialogue here and there, and the scares work for the most part. This may be Paul W.S. Anderson’s best film, for better or worse. If you see Red Planet coming on TNT, watch it and you’ll be thankful for Event Horizon. 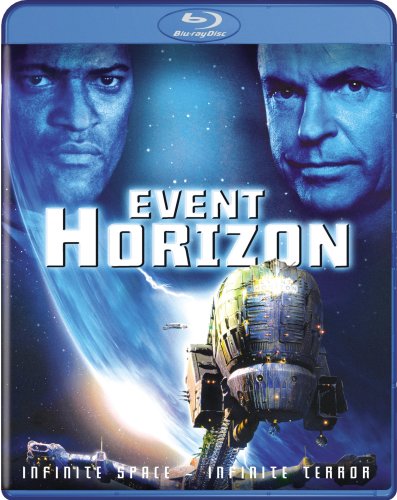