OK, this is a film we’ve seen before but never reviewed so now’s our chance, and yours, to check it out. Anchor Bay had previously released this film to DVD but that version isn’t worth seeking out as this one is nearly identical.

This film follows Marcus, a man who of course works in a dirty slaughterhouse and has a rocky relationship with his fiancée. Marcus is a man on the verge of a mental break and a fight with a cab driver is just what it takes to push Marcus over the edge. He beats the cab driver to death and stashes the body. Marcus’ fiancée begins to feel bad about the murder and wants to go to the police. She gets paid back with one last romp in the sack and is killed.

The chain continues as people constantly visit Marcus and he must hide his fiancées’ body and Marcus’ nosey neighbor watches everything happen. The box art and promotion of this film is definitely misleading. Gore hounds and exploitation fans looking for their bread and butter here will starve because that’s not all that this film is about. There is a bit of gore and sexual situations but it’s all pretty minor, and the “cannibalism” we expect due to the name of the film is extremely minor in the film and mostly insinuated rather than visual. This film is more about Marcus’ spiral into madness. It’s very Hitchcock in presentation with more emphasis on suspense and character than visceral visuals.

Cannibal Man may surprise many that give it a shot and don’t grumble because of the lack of blood and boobs because there’s a well acted and directed thriller here. Now there are a few scenes of black comedy and some of them work and others don’t but the failings don’t detract from the gritty atmosphere of this film.

The anamorphic widescreen presentation looks pretty solid but there is some grain, print damage, and darker scenes get really muddy. This isn’t Criterion but it’s pretty good, and likely to be the best we’ll ever see this film look.

OK, all we get here is a Dolby Digital Mono English track. Dialogue is expectedly flat in this dub and there’s nearly no dynamic range in the presentation. It’s listenable but not mind blowing.

The box art for this single disc release is eye catching but I don’t think it truly represents the film.

The only bonus feature here is a trailer….

Cannibal Man is better than you’d expect and should be checked out by fans of great thrillers. It’s unfortunate that the presentation here is so basic with no bonus materials. 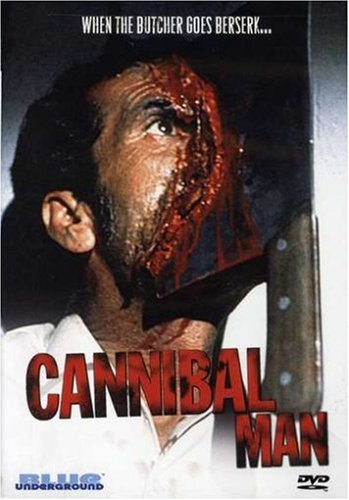