If you are a fan of psychological thrillers and love Poppy Montgomery from Without a Trace, then Between released by Porchlight Entertainment on DVD, is for you.

Nadine Roberts (Poppy Montgomery) is on the verge of losing her mind. She is suffering from sleep deprivation, loss of appetite and has frequent panic attacks that send her mind and heart racing. What is causing Nadine problems?

Her sister went on a trip to Tijuana and never returned. She disappeared without a trace. So, she tells her boyfriend adios and heads to Mexico to get to the bottom of things. Unfortunately, things go from bad to worse.

While in Mexico, Nadine’s symptoms worsen. She develops intense nightmares and finds herself having trouble distinguishing her nightmares from her every day life. It is almost as if she is in a waking, living nightmare. And this is only making her worry and panic more for her sister.

She finds a sympathetic ear in a local Tijuana detective that helps her. Will they find her sister or will Nadine be forever stuck in between reality and a nightmare?

Between could be best described as your standard garden variety psychological thriller. For some reading the description of the film, it reads as a high recommendation, for those that love that genre of film. Between does have some nice twists and turns as the film ticks into the final act.

Montgomery does a good job in the role, but this isn’t Oscar caliber screenwriting, so she makes the best of it. There may be those out there that love her in Without a Trace so you will enjoy her here.

I am not the biggest fan of the genre. Don’t get me wrong, I can list several films I really enjoyed that fit in this genre. I just wouldn’t say I would watch just anything that falls into this genre. But I do know quite a few film fans that fit into this description. I think they would watch even watch a psychological thriller that would put Lindsey Lohan in the title role playing a stripper trying to solve her own murder. Wait, that wasn’t a nightmare, that actually was committed to celluloid and screened at your local multiplex.

I digress. Anyway, those of you that like this sort of film, know who you are and have probably added this to your Netflix queue already.

Those that aren’t the biggest fan, you can skip this one.

Between is presented in anamorphic widescreen format, the overall transfer is good. There is no graininess and the colors are vivid and crisp.

Between is presented in Dolby Surround 5.1, the sound is well balanced and nicely presented.

The DVD comes in a standard aramay case with a simple design.

The only bonus feature is a director’s commentary with David Ocanas. 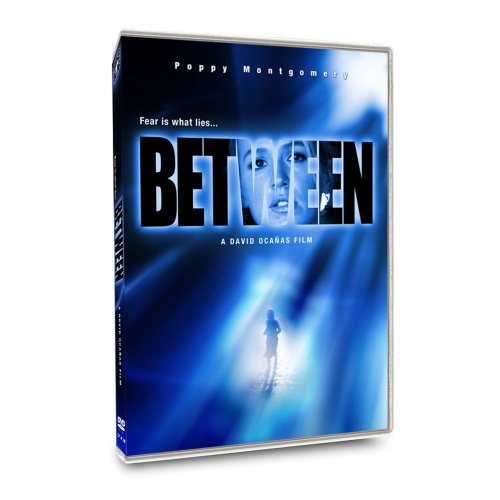