Dimension Films slipped into the “extreme” horror market with their new un-creatively titled line Dimension Extreme. While the line may not be that creatively titled it does look to be going in the right direction to live up to the name.

For a few fantastic year Asia was bringing the noise with some of the greatest horror films ever made. Films such as Audition, Ichi the Killer, Oldboy, Ju-On, and even the original Eye broke new ground and pushed boundaries to become innovative and disturbing classics. Well what you might expect to happen does; the me too’s flooded the market and became so watered down – in order to make the films easier to sell to international markets – that horror films from Asia are near irrelevant these days. Hollywood is still remaking Asian films like mad though.

The genre isn’t dead though; the innovation just moved to another part of the world, France. French films like Haute Tension and In My Skin took up the banner of groundbreaking horror and my hopes were high for a bevy of great films again.

The latest film from the Dimension Extreme line is a French film called Inside. This riveting film offers a new perspective for suspense and gore. At the beginning of the film a woman is the victim of a violent car accident living her a pregnant widow. She is emotionally damaged even month’s later as the due date nears. On Christmas eve she is spending the evening alone with plans to go to the hospital to birth her baby the next day.

At home though once things are quiet and the house is dim she begins to be tormented by a mysterious woman, a woman who wants her baby and she wants it now, before it’s even born. Much of the film is built on a familiar formula cat and mouse suspense but it all moves beyond the expected levels of gore for a “suspense”. As the chase begins through the house things get the most interesting. A simple bathroom door separates them with the killer doing everything she can to get inside and the victim trying everything she can to escape. It feels almost too real. Usually the killer is nearly superhuman and just busts the door in. Not this time and the result is even more animalistic, brutal, and disturbing.

I’d love to say there’s tons of metaphor and commentary buried in this film but honestly there isn’t much. Inside is a fairly straight ahead horror flick with some really disturbing and extreme blood and gore. I don’t say that as an insult because the film is “extremely” good at what it wants to do and it feels completely uninhibited by fear of cultural repercussions. This film has a goal in front of it and unlike most American horror flicks it meets and surpasses that goal. The film isn’t brain dead either. There’s a perspective in the film that could be considered gimmicky but I found it to be quite effective even if the effect comes off just a bit cheap.

True fans of horror should see this everyone else should probably hide from this one. Inside fits the “Extreme” label perfectly.

The widescreen video is very very dark and often really tough to see. Most of the darkness is intentional but the very basic DVD transfer featuring some softer detail makes the film a bit harder to see than was intended by the filmmaker. Colors are solid but due to the low detail black levels in particular are murky. While far from great this transfer is stronger than most imports we see.

The surround sound presentation is really clean but again basic feeling and a bit imbalanced. In a few cases I had to crank the volume for some dialogue and then some scare would nearly blow me out of my seat Maxell style. This only happened once or twice though. The surround usage is there, but barely. It’s a good enough sort of presentation but not great.

The single disc comes in a standard amaray case with artwork that does a good job of representing the grittiness of the film.

There’s not much on the disc other than the theatrical trailer and a brief making of featurette. The featurette is a good watch but it doesn’t really enhance the viewing experience at all.

Not every DVD can be a major special edition and not every movie deserves or requires hours of bonus features but most DVD’s should get the best possible audio/video presentation and a commentary at the minimum. With that said horror fans should still absolutely buy this release immediately. 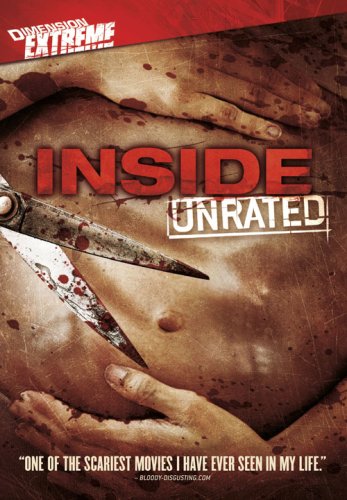