Those of you who read this site regularly know that I’m a big fan of exploitation cinema and 70’s cult cinema. Lately there’s be a resurgence of interest in this sub genre of film and I couldn’t be happier.

Black Snake Moan is a fantasy film that seems as though it could have been a part of a double feature on a Saturday night at a drive-in from the 1970’s. Christina Ricci plays Rae, a young white trash woman who has a problem with sex, or well a problem with not having it anyway. Her boyfriend Ronnie, played by Justin Timberlake is headed off for a tour in the military so he can save enough money to get himself and her out of the town they live in, hopefully to Knoxville. Now that’s a real improvement!

Rae has apparently been cheating on him the whole time they’ve been together and when he leaves, she kicks into overdrive having sex with a local drug dealer, a random guy at a party, and almost with one of her boyfriend’s buddies. When she insults him he beats her up and throws her out of his truck into the street. The next day Lazarus, an old bluesman turned farmer played by Samuel L. Jackson finds her lying in the street and takes her back to his house to try and fix her up. She’s recovering from a beating and a heavy night of drug use, and also a bad cold. He cleans her face, gets her some meds, and takes care of her for a few days while she comes in and out of consciousness. In town he learns from everybody that his new patient has slept her way back and forth across town since she was in high school. He realizes that this girl isn’t just a slut but that she has a disease and he is the man to cure her. It’s sort of a project for him since he himself is just starting to find himself again after his long term marriage had just come to an end.

Lazarus dusts off his old guitar and starts playing again while he waits for Rae to wake up. When she does she discovers a huge chain has been wrapped around her and attached to a radiator. Lazarus tells her he knows about her itch and he’s gonna help her fix herself. She tries to fight it and even offers him sex in exchange for her freedom but Lazarus won’t relent. He tells her, himself, and his preacher friend that he won’t be moved on this.

It turns out that Rae and Ronnie are quite the pair. She has her obvious problems but Ronnie seems to be putting up with them because he himself has some mental problems that Rae has been able to help him fix. Rae’s sickness burns inside her and it stems from abuse as a child but now the only thing that fixes it is sex. Ronnie has anxiety that sends him into a panic but Rae’s reassuring touch and voice seem to calm him. These two can’t live separate, they need each other. AS Rae’s treatment continues there are mishaps the worst of which being when a teenage boy comes to visit Lazarus when he’s in town and Rae gives into temptation and has sex with the boy.

There are a couple of scenes that are right out of the 70’s high concept drive-in playbook and they are executed fantastically. My favorite of these scenes is when Lazarus plays the song “Black Snake Moan” for Rae as she sits on the floor in front of him in his old house. Thematically both Lazarus’ and Rae’s demons are weighing in on them and they need each other to get through it. As Lazarus plays the song a storm erupts and the lightening and thunder crack and rumble all around them representing these demons and trying to slip in under the doors and through the windows to get them. Rae wraps herself around Lazarus’ leg and begs him to keep playing. The scene is so over the top it just made me smile. The other great scene is Rae’s trial by fire and Lazarus’ return to the man he was, the man he wants to be. He puts his old band together and they put on a rowdy show at a local dive bar with Rae sitting nearby watching. The room is packed with people dancing and drinking and Rae is there dancing to this sultry blues music with men and women all around her.

This is definitely a high concept film that you’ll have to sell yourself on pretty quickly to enjoy, and if you do, you’re in for a great time. The acting is top notch, the direction is fairly basic and gritty, as it should be for a film of this type, and the music is phenomenal. My only complaint is that a couple of times within the film archival footage of an old bluesman talking about the blues is cut into the film awkwardly. The man has some interesting things to say about blues music and now I want to see more of this footage, but it completely halted the story for a few minutes. It also feels like a little to modern of a decision for a film that’s otherwise executed in such as retro way. This is a very minor complaint for an otherwise fantastic film. It’s total drive-in from execution to dialogue and its the most fun I’ve had at the movies so far this year.

Black Snake Moan is a fairly recent film but at the same time it’s not a big budget affair so I wasn’t sure what to expect. When I threw the disc in I was surprisingly blown away by the overall look of the film. It’s world’s above and beyond the previous standard definition DVD release.

Colors are outstanding with realistic skin tones being the standout. The colors are purposefully muted with lots browns and dirty white t-shirts and all of it looks phenomenal. Black levels are also solid throughout the film. The detail in the film is also impressive with imperfections in people’s skin and stains on their clothes coming through strong.

Grain, compression artifacts, and edge enhancement are all nonexistent. This may be my first pick for a perfect HD-DVD transfer.

Again, as with the video, this Dolby Digital-Plus audio presentation completely took me aback. Through most of the film we just get a solid dialogue driven presentation with crisp dialogue well balanced with the score and ambient sound effects. But, things change at various points in the film such as any time Samuel L. Jackson picks up a guitar or when Ricci’s character starts to lose control of herself. IN these instances the sound becomes deep and immersive with great ambient sounds subtly immerging from all the speakers in the soundscape and the music coming through solid with an impressive dynamic level.

Of course the sequences featuring archival music and interviews suffer from poor audio and there’s also a few other instances where the quality drops for just a few minutes. Overall though, this film gets a better audio presentation than you’d expect and it’s better than most other similar films hitting HD-DVD so far.

The single HD-DVD disc comes in a now standard mini amaray case with artwork replicated from the original DVD release.

The best bonus feature on the disc is the audio commentary with writer/director Craig Brewer. I’ve spoken with him in person before and he’s one of these directors whose enthusiasm ins catching and that comes through in the commentary. Brewer covers everything from early drafts of the script to Jackson’s guitar training, to Ricci’s performance. There’s plenty of good information here that’ll enhance your appreciation for the film.

Conflicted: The Making of Black Snake Moan is a half hour documentary featuring interviews with all the major players contributing interviews and a solid amount of behind the scenes footage. My favorite part of this featurette are the interviews with Samuel L. Jackson and Christina Ricci.

Other than that there are two very brief short featurettes about the music in the film, a theatrical trailer, some deleted scenes, and a set of production stills. The deleted scenes feature optional audio commentary with writer/director Craig Brewer.

All of these extras are simply ported over from the original standard def release. It would have been cool to get some new extras specific to this release but it didn’t happen so we have to be happy with what we get….

I love this film and this is the best it will ever look. It’s shockingly gorgeous and the audio is also strong. The extras, as slim as they are, offer some good information so this is a great buy. 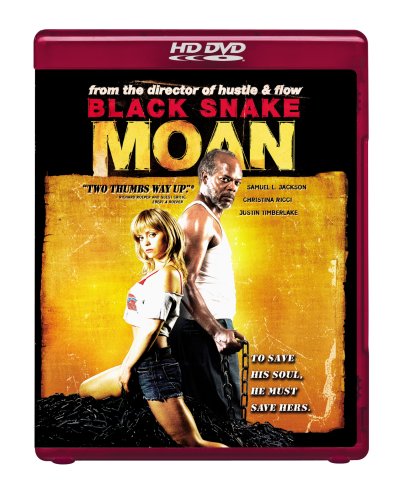